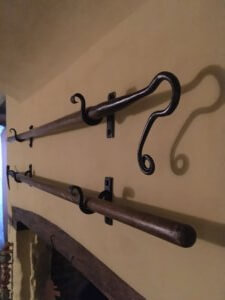 At the turn of the year into 2018, I thought I would share with you an act of pure kindness from someone I have never met.

Although he is no longer with me, I am on a mission to make the cottage Steve and I shared as beautiful as it would have been, had we continued to improve it together.  We had struggled with what we should hang over our inglenook fireplace, having removed a mantlepiece which had obscured the beautiful oak lintel.  A “Good Shepherd” statue is mounted on the front of the cottage, and I have something of a sheep theme going on inside, so I hit upon the idea of shepherd’s crooks.  I bought two antique crooks, but how to mount them on the wall?  Again, a fairly easy decision – I needed four bespoke brackets from the Blacksmith Collection, who had made all our curtain poles/finials and fixings.  I rang Daryl.  I was keen that the brackets would match our previous orders, which had all been measured and ordered by Steve.  As I was now on the phone, I ended up explaining my story and also (as Daryl was lovely to speak to) something about our new charity, Story FMR.  Daryl said that he was busy up to Christmas, but would email with a quote shortly after then.

Imagine my surprise when the brackets arrived by courier the week before Christmas.  They were perfect and came parcelled, complete with bolts and a little spanner, and a note which said that they were free of charge and had been made in memory of Steve, asking me to make a donation to Story rather than payment.  Such thoughtfulness and generosity just before Christmas really touched my heart.

As you can see from the photograph, the bespoke brackets look fabulous above my fireplace supporting the crooks, but much more than that they are a symbol for me of the support I have in rebuilding my life in this lovely cottage.

Daryl and his wife, Judy, mindful of people they have lost within their own family, have decided that they will enjoy life more; I so support this thought, and I too plan to have many adventures, many of them in support of Story FMR and in playing a small part in conquering this disease.

My message for 2018 – enjoy life, do everything you want to do, and support Story FMR!